Talented Youth behind the Curtain of Shakespeare

What do you think theater means to young people? Just a boring live stage performance, with background music and colorful costumes? Then you don’t know that you are missing out on a truly powerful, engaging and heart touching experience.

“Around the world artists are creating a new type of theater for young people that combines the elegance of dance and acting.” This was written on the leaflet of the Network for Children’s Rights theatrical play and it drew my attention.

Nowadays young people have more and more mature theatrical visions and we can see that in the youth theater group of the Network that performed Hamlet.

Everything started at the Youth Center of the Network. As for the play it was based on Shakespeare’s “The Tragedy of Hamlet, Prince of Denmark”. But how can theater affect young people?

“Not to sound overly grand, but so much of the toxicity in this world comes from a collective lack of empathy. We don’t understand each other and we don’t want to, but theater invites us – no, forces us to empathize. Theater is like a gym for empathy, it’s where we go to build up the muscles of compassion, to practice listening, understanding and engaging with people that are not just like ourselves,” stated the teenage boy who had the leading role in the play.

I became so engaged with them, that I decided to write about the ‘Hamlet’ group after they invited me to watch their play on the 21st of October at Topos Allou theater in Athens. After the play I interviewed the directors, actors and actresses.

“The first theatrical workshop took place in Athens in July 2017 and lasted one week. It was proposed and organised by the French theatre group ‘Je Pars A Zart’, made up of seven teenagers and two adults. We did the workshop together and it was a great success. As a result of this good collaboration, the French group submitted an application to the European programme Erasmus Plus for more shared workshops, and this was accepted. The project was named City Zen Ship and the 2017-18 scheme involved the Greek group travelling to France to put on a performance there. In October 2017, we began two-hour meetings every Thursday with eight participants and 2 coordinators. Some of the teenagers didn’t have any theatrical experience so we spent the first three months playing theatrical games. Eventually the group was given a text, specifically Shakespeare’s Hamlet, chosen by the director Ismini Proiou. In November 2017, two coordinators from the French group came to Athens and held a puppet theatre workshop with puppets and puppeteers. Slowly and steadily, the group began to work on the text and to watch films of Hamlet. On June 21st 2018, we travelled to Montpelier where we stayed for ten days. We spent the first four in tents inside the camp of Festizat, the festival organised by Je Pars a Zart. The festival was open to all and the programme included theatrical performances, concerts and events for all ages. To begin with, the teenagers found it rather difficult because they were in a foreign country, far away from their parents, but the got used to it quite quickly. On June 24 th, we performed Hamlet in Greece in front of a very big audience. On the 25 th, we moved into accommodation in town. Our schedule there included daily workshops, city touring and time with the French teenagers in order to learn more about their way of life. Greeks and French had a great time together. On our final day, June 29 th , we put on a play together. We returned to Greece on June 30 th with new experiences and many memories. This July, the French teenagers will come to Greece,” Vasiliki Papageorgiou, the director of the programme, told us.

I also had the chance to speak with some of the talented teenagers who performed in the play.

“I have no previous experience, it was my first time in theater and I was so shy and nervous, because I had to face a huge audience,” said Elena Miah when asked about her experience.

As for the casting process Sofia S mentioned that, “I had some experience in theatre before this, so the casting director, cast me as the father of Ophelia. I wanted to be Ophelia but I couldn’t.”

Asked about his part in the play, Anas Miah told us, “I played the army sentinel Marcellus and one of the two gravediggers. King Hamlet got murdered by his own brother so that he could take his throne. The son of King Hamlet also had the same name as his father. He didn’t know that his own uncle had poisoned his father. After murdering his brother, King Hamlet, the uncle took the throne and married his brother’s wife. When King Hamlet’s son found out that his uncle had murdered his father, he began acting as if deranged so that he could take revenge.”

Talking with Isaiah Obamwonyi, the teenager who played King Hamlet’s son, we find out about his feelings during the performance, “Acting in front of your friends is fun but acting in front of such a large audience is tough.. As for the difficulties we faced many in the beginning but we got used to it. The audience were so friendly.”

Talking with the Teater Group of Hamlet was a good experience. I saw the play which was in Greek, but my friend translated everything for me. If you take a child to the theater not only will they practice empathy, but they might also laugh uproariously, or come home singing about history and poetry or, learn how to handle conflict, or even start becoming future patrons of theater and the arts. My experience with them made me join their theatrical group.

As I sat through the successful play “Wake up Vasili”, which is inspired by the Greek film of the same title, I was particularly interested in the message that it was trying to convey. At the start of the play, the...

Fashion is always defined by the designers of clothing, footwear and accessories. Shafigheh Qias is an upcoming Afghan fashion designer with her own delicate Afghan style. By supporting Afghan people’s tradition... 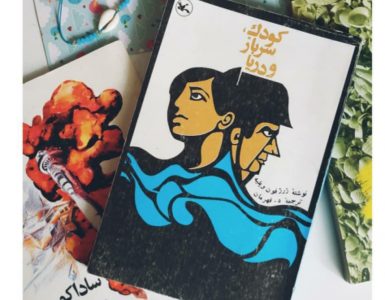 I read the book “The child, the soldier and the sea” by George Fonvilliers and found it very interesting.  I would like to share it with you because we have all known war and understand it all too well. The book is set...