A home away from home

This is a short story that was written as part of the Erasmus+ “Change your life, Open your mind” programme. The 1st Experimental Primary School Of Thessaloniki – AUTH, took part in the programme after a visit by refugee children to the school.

It’s been a few weeks since we changed country, house, neighbourhood, friends… My name is Azber and I was born in Iraq. I will be 8 in a couple of weeks. It’s weird because it is going to be the first time that I won’t be celebrating my birthday with my friends. My family and I have left our home. What is a home?

Things in Iraq were getting a bit odd towards the end. My mom was silent and seemed sad. My dad was worried and whenever I asked him what was going on he would answer sternly: “Nothing that concerns you”. I wasn’t seeing my friends very often and schools were closed. I would draw on my sketchpad for hours. I would get lost in the drawings. Weird things were happening outside. From time to time, we would hear loud sounds that would scare me

Then one night, it must have been around 2am, my mom woke me up. My dad was at the front door talking to a man. This man led us to a van and we all got in it. He drove for a long time then finally stopped. We got out of the van and my dad helped the man take out an inflatable boat. We put the inflatable in the sea and got in. After that… After that, I don’t remember. I guess I must have fallen asleep. My mom and dad told me that we went on a long journey.  A very long journey… Towards a better life.

When I woke up I was in my father’s arms. We walked for a while until we reached a tent. Inside was mom. My dad put me down. I stuck my head out of the tent. There were many people of different skin colour around and they were speaking different languages. The place was enclosed by a barbed wire fence. My dad told me that this place is called a refugee camp.

A few days have gone by and I am starting to get used to the camp, but I miss our house in Iraq. New people keep coming to the camp with the hope of finding a new home. I learnt that our village was bombed and nothing is left. Does that mean we don’t have a home anymore? Will the camp be home? If so, then why are all these people here waiting to be transferred somewhere else?

It’s been almost two months now. Today I heard someone, who was wearing a strange uniform, say that refugees living in tents with numbers from 423 to 456 will leave the camp. We have been living in tent number 443 with two other families. To begin with I thought I had misheard, but that night another man in uniform told my dad to get ready because we were going to be picked up very early the following morning. So it was true. It was time to leave, just as so many others have left, giving their place to many more.

I’ve been wanting to leave for a long time, but now I am not sure what I truly want anymore. What if where they take us is worse? In the camp they give us water and food. The camp doesn’t feel like home, but at least I am not on the street. I wonder whether this new place they are taking us to will feel like home.

I woke up early the next morning. Two people in uniform came and escorted us to a car, and two hours later we were somewhere new. They left us there and drove away. We would now be living in a small apartment in a six storey building.

Although I didn’t have any friends to begin with, and mom and dad were away most of the time looking for a job, I felt that this small apartment was my home.

In Iraq and in the camp I had a roof over my head, basic necessities and my family, but I didn’t feel safe. I feel safe in this small apartment, which is what makes it feel like home.

It’s been a month since we got here and things are going well. Mom and dad have found a job. Mom washes dishes in a taverna and dad works on a construction site. I have started going to school. It is difficult when you don’t know the language and the other children sometimes look at you in a strange way, but it’s ok. I  am learning fast and I’ve made two new friends, Fadih and Johan. All three of us are from different countries. We are three foreigners in a foreign country looking for a better life, as my dad said when we left Iraq. Fadih, Johan and I are good friends. We don’t bother anyone and we help each other whenever necessary. In the end, a home is the place that makes you feel safe and where there are people willing to protect you. Our new house is perfect, and most importantly, it is a real home! 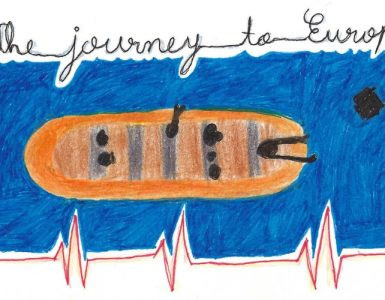